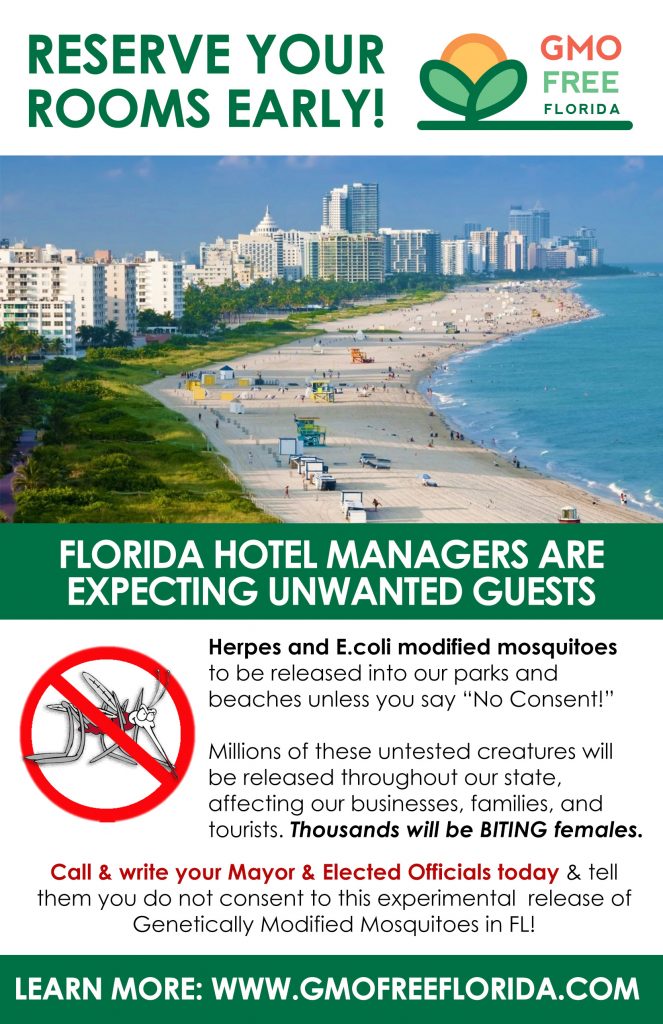 Action: CALL -and- HAND WRITE A PERSONAL LETTER to your elected officials in Florida.  (Find your Representative)

What to say?  “I do not consent to the experimental release of Genetically Modified Mosquitoes in any location in Florida.  (Contrary to what Oxitec states) females will be released –What regulatory agency will be responsible should my family or pet have an adverse reaction?”

Millions of GE mosquitoes are awaiting release in the Florida Keys –or- an undisclosed Florida location near you. These dangerous mosquitoes were created by British company Oxitec, with a synthetic gene using a fusion of DNA sequences based on from Herpes and E.coli, plus genetic elements from the cabbage looper moth, coral… and a vinegar fly.  This gene was used in rodents and was toxic to the rodents which Oxitec acknowledges.  http://www.genewatch.org/uploads/f03c6d66a9b354535738483c1c3d49e4/Oxitec_GWbrief_Mar15.pdf

The company’s hatching and rearing process relies on tetracycline which Florida physicians say may open the mosquitoes up to carry antibiotic-resistant bacteria and transmit it to human beings.  https://citizensforsafescience.org/2016/10/23/key-doctors-demand-gmo-mosquito-tests-oxitec-refuses/

Oxitec falsely claimed all mosquitoes will be male but when pressed, they admit that females which can bite and spread disease will be released. So they can potentially increase mosquito-borne diseases by releasing thousands of additional females.  http://www.genewatch.org/uploads/f03c6d66a9b354535738483c1c3d49e4/Oxitec_GWbrief_Mar15.pdf

Once released they cannot be recalled. No one knows what effect they may have on the fragile ecosystem in Florida or the Florida Keys, on insectivores… on human or pet health.

SOLUTION: If one would like to eradicate this invasive Aedes aegypti (one of the types of mosquitoes that carry Zika and tropical diseases) the EPA has approved the release of Wolbachia infected mosquitoes which are already proven to lessen said mosquito populations that carry said diseases — Wolbachia is safe for humans, pets, and fragile ecosystems since they are not genetically modified with foreign DNA.  And remember, boots on the ground Mosquitoes can breed in a bottle cap of water – remove all standing debris and water on and around your property to lessen all mosquito populations.
http://www.eliminatedengue.com/program
http://mosquitomate.com/

Will your state be next?  Get involved: www.gmofreeflorida.org